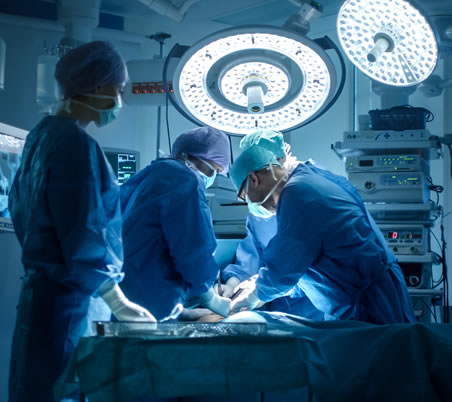 John was involved in a car wreck and suffered a neck injury. After his initial recovery, John noticed he was having difficulty buttoning his shirt and picking up small objects such as coins. When he questioned his doctor, a neurosurgeon, John was told a ruptured disc in his neck was pressing against nerves and causing a loss of his fine motor skills. The surgeon recommended John have the ruptured disc removed and replaced with a bone graft. The graft would be held in place by a small rectangular titanium plate and four (4) tiny screws. John agreed to have the surgery, which involved an incision on the right side of his neck, cutting through the muscle and shifting the esophagus out of the way so as to expose the spine, then removal and replacement of the disc with a graft. John was told the procedure went well and was a complete success.

Several days after surgery, John noticed an annoying tickling sensation in his throat. It caused him to cough and try to clear his throat and eventually grew worse. When John developed a fever and chills, the surgeon told him he probably just had a cold and advised him to take Tylenol. John began to cough more frequently and he felt terrible all the time. He called his surgeon on several occasions but was always told to keep taking the Tylenol and get plenty of rest.

Four (4) weeks after the surgery, John was sitting at home one Saturday morning watching television and he had a violent coughing spell. He covered his mouth as he began to cough and felt something fall into the palm of his hand. When the coughing spell stopped, he looked into his hand and found one of the screws which had been placed in his spine four weeks earlier. Frantic, John called his surgeon but could not reach him. The surgeon’s partner advised John to come back to the hospital immediately. John’s wife helped him into their pickup truck and drove him to the hospital. By the time they arrived, John could not move his legs. He was unable to walk into the emergency room. John was rushed to surgery immediately. He awoke four days later to find himself completely paralyzed from his mid-chest down. He had lost the use of his dominant right hand and arm and had only limited use of his left hand and arm. Because of errors by his original surgeon, John would spend the rest of his life as a C-6 quadriplegic. A self-employed businessman and father of two (2) infant children, John would be in a wheelchair for the rest of his life. He would never walk again, never have a normal relationship with his wife, and he would require twenty-four (24) hour a day nursing care. Eighteen (18) months after he became a quadriplegic John’s wife divorced him, and took their two (2) children. John now lives with his nursing staff who care for him day and night.

A suit was filed against the neurosurgeon who performed John’s original disc removal and fusion as well as the manufacturer of the plate and screw system which was used in his surgery. Experts retained on John’s behalf testified the surgeon had stripped one of the screws as he put it in and he should have removed and replaced it with a larger “rescue” screw instead of leaving it in the plate hoping the fusion would heal without further incident. Engineering experts who reviewed the design of the plate and screw system found that it lacked a simple safety feature that would have prevented the screw from backing out. Collectively, experts retained on John’s behalf testified that following his discharge from the first surgery, the stripped screw began to work its way out of the plate every time John spoke, swallowed, or coughed. As the screw backed out, it pressed into the edge of John’s esophagus, eventually causing a hole in the esophageal wall. The hole became an entry point and caused an infection to set up in John’s spinal cord, literally crushing the spinal cord and causing his paralysis.

After two and a half (2½) years of investigation and trial preparation, the case was mediated and the surgeon and screw manufacturer settled for Three Million Dollars ($3,000,000.00). The car wreck which caused John’s injury was settled for Nine Hundred Seventy-Five Thousand Dollars ($975,000.00). Since John was performing work-related duties at the time of the car wreck, he was deemed to be eligible for workers’ compensation benefits which paid all of his medical expenses to date, as well as all of his future medical expenses, including handicap accessible vans, a specially equipped home, and nurse staffing to remain with him for the rest of his life. To date, John has received money and benefits in excess of Eight Million Five Hundred Thousand Dollars ($8,500,000.00).

Fifteen-year-old Cindy suffered from scoliosis, or curvature of the spine.  Cindy’s pediatrician referred to her a local pediatric orthopedic practice that specialized in corrective surgery for scoliosis.  The surgery involved cutting into Cindy’s back and exposing the spine, straightening the curve, and holding the straightened spine in place with wires, screws, and hooks.  The screws and hooks were to be anchored into Cindy’s vertebrae and the wires stretched between them in such a way as to straighten Cindy’s spine.  Since the procedure involved potential risk to Cindy’s spinal cord, the operation would be monitored by a technician whose equipment was designed to alert the operating team if a potential spinal cord injury occurred.  Cindy’s parents agreed to the surgery.

Although the surgery was scheduled to take four hours, it was not finished for almost eight hours.  The surgeon told Cindy’s parents the procedure was complicated when the neuromonitoring equipment registered a “false-positive” which showed a potential injury to Cindy’s spinal cord.  When the monitoring equipment readings were inconclusive, the surgeon performed a Stagnara wake-up test which involved reducing Cindy’s anesthesia, asking her to move her legs and wiggle her toes, and then increasing the anesthesia again so as to complete Cindy’s surgery.  The surgeon assured Cindy’s mom and dad everything else went well and Cindy would be fine.

Cindy was kept heavily sedated for several days following surgery.  Eventually, it was noted that there was no movement in Cindy’s legs, feet, or toes.  Four days following the surgery, a CT scan was ordered which showed that two of the screws placed in Cindy’s spine were pressing against her spinal cord.  Cindy was immediately returned to surgery; however, the damage had already been done to the spinal cord and Cindy was rendered a paraplegic.  She will spend the rest of her life in a wheelchair.

A suit was filed against the surgeon, the intraoperative neuromonitoring service, and the hospital where Cindy’s surgery was performed.  The experts hired on Cindy’s behalf testified that (1) the surgeon was negligent by placing in Cindy’s spine incorrectly so that it would damage the spinal cord, (2) failing to order appropriate testing when advised by the neuromonitoring technician of an adverse occurrence and (3) failure to remove the screws and apply steroids to Cindy’s spinal cord so as to prevent or minimize any potential damage.  Allegations of negligence against the neuromonitoring technician included, (1) failing to notify the physician immediately when an adverse event occurred; (2) failing to correctly record significant operative events, and (3) failure to use the monitoring equipment appropriately as required by the type of surgery being performed.  Allegations of negligence against the hospital included (1) failure to properly train the technician to perform her duties in a professional and responsible manner; and (2) failure to have a neurologist M.D. or D.O. or neurophysiologist Ph.D. available to advise the treating surgeon when he was warned by a neuromonitoring technician of an adverse advent.  The doctor, neuromonitoring technician, and hospital denied responsibility for Cindy’s injury, arguing that it was a rare but recognized risk of spine surgery.

After the suit was filed, the parties engaged in extensive pre-trial preparation for two (2) years.  Over thirty-five witnesses statements were taken.  Expert witnesses were deposed in Washington, D.C., Atlanta, Georgia, Orlando, Florida, and San Juan, Puerto Rico.  When the case was scheduled for trial, the doctor, neuromonitoring technician, and hospital requested mediation.  After fourteen hours of mediation in which more than twenty people participated, the case was resolved for a significant confidential sum that would provide financial protection and adequate resources to care for Cindy for the rest of her life.